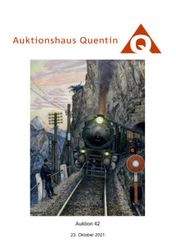 The personal, written, telephone or internet participation in the auction, the post-and-ink sales are recognized following conditions:

2.The call usually starts at 2 / 3 of the estimated price in the catalog. One increased by about 10 percent.A delivered requirement remains effective up to the end of the auction. A lot is knocked down when no higher bid is offered after a bid have been called three times and the minimum price is reached. If an addition takes place under reservation, when the bidder is bound three weeks to its offer. If a reservation is not authorized by the consignor or someone offers the minimum price, the lot is given without further notice to the first bidder, to the one who bid the limit. If a bid is rejected, the preceding bid shall remain in effect. If several bidders deliver a equivalent high requirement, then the date of receipt or lot decides. Is there a doubt about a bid, its allowed the auctioneer to make a new bid - fight or he is able to give the items to a spezial bidder. The preceding bid is thereby invalid . Personally present, the auctioneers unknown bidders, have to show their Identy - card. Sometimes if necessary, its permitted to the auctioneer to receive spezial bank information or the bidder has to give other warranties. The assumption obligation of a bid does not exist however.

4. With the award (hammer price)comes off a sales contract that requires the payment and acceptance. The amount is payable in cash EUR. Ownership is only with payment of the purchase price to the buyer. With the delivery of the item purchased, all risks, in particular the risk of accidental destruction and accidental deterioration of the auction,subject-matter, to the transferee. The Auction House Quentin insured at his own expense the auctioned amount of the purchase price in favor of the buyer until the occurrence of default. At a premium surcharge is payable by 25%, in which the VAT is included (margin scheme). Own goods are marked with an * and it is on the final price (hammer price + buyers premium) value Added Tax. During or immediately after the auction require verification of invoices. Errors and omissions excepted. -

5. The buyer will be 14 days after the invoice date in default. If the buyer is in default, he shall pay interest at the rate of 1% per month or part thereof. Two months after the due date, the Auction House Quentin has the right to demand instead of the legal rights (withdrawal from the contract) to continue the contract. The Auction House can also put the subject into the next auction. On an excess of proceeds the preceding customer does not have claim. With the addition its right to the article expires, not however requirements for damage of the Auktionshouses. The Auction House Quentin has the right to exclude him from further bidding in the auction and name and address pass to other auction houses. The Auction House Quentin is authorized to assert the rights of the consignor and in connection with the contract claim in its own name. The buyer must pick up their purchased item after full payment of his debts within 14 days. If the buyer does follow its obligation to the decrease despite reminder (period setting), then the auctioneers Quentin have the right to store the appropriate article at the expense of the buyer into a liable to pay the costs camp. -

6. The descriptions are accurate to the best knowledge and belief. There are no guarantees in the legal sense. All items for auction can be viewed and inspected during the preview. They are needed and will be sold in the state in which they find themselves at the time of the auction. Defects are only mentioned in the catalog descriptions, if they affect the overall visual impression of the work. The Auction House Quentin is not liable for open and hidden defects as well as write-ups. All claims opposite the Auction House shall become statute-barred one year after the transfer of the possession of the item. In this time in addition only, if the Auktion House can still reach the deliverer.The Auction House reserves the right to correct catalog information on the items to be auctioned. The adjustment shall be by written notice at the place of the auction or by oral announcement by the auctioneer before the auction. Images are for guidance only for the buyer and are not relevant to the condition of the item, nor for their properties. As far as from the auction otherwise provided herein, are claims of the buyer against the auctioneer, the Auction House Quentin, ruled by its legal representatives or employees in connection with the auction or the conclusion, the implementation of the Purchase Agreement or other legal reasons. This does not apply to damage caused by willful, grossly negligent conduct.

7. Only the law of the Federal Republic of Germany is valid. Jurisdiction is Berlin. The United Nations Convention on Contracts for the International Sale of Goods shall not apply. Should one or more provisions of this contract to be or become invalid, the others remain unaffected and retain their validity. (Severability clause)

8. The shipping calculation is performed upfront, and in exceptional cases by cash on delivery of the bill. Each shipment is invariably only on written instructions, cost and risk of the buyer.

9. Bidder numbers will be issued prior to the auction, and throughout the preview. The bidder is liable for the improper use of his bidder number. - Auction House Quentin GmbH, AG. Berlin Charlottenburg, HRB B 79 638

Geissler, Wilhelm, ''Do you want a light?''. Der Zigarrenverkäufer